In part 1 of this series we looked at the protocols involved in a Facetime call. The basic outline of the Facetime network exchange is as follows:
In this installmemt of the series we'll look at the last two components: SIP and the UDP stream information.
Examining SIP
SIP is the Session Initiation Protocol, used for controlling the setup and establishment of audio and video calls over TCP or UDP. As a text-based protocol, it looks a lot like HTTP (verbs like INVITE and BYE and numeric response codes), with a little SMTP love thrown in there as well.

Wireshark does a great job of identifying SIP traffic, even on non-standard ports. While SIP is typically done over port 5060 (or 5061 for SIP over TLS), Facetime is using UDP/16402. Wireshark gives us a summary of SIP activity in the packet capture by selecting the Telephony | SIP option, as shown.

Also interesting here is the use of the SIP MESSAGE verb. According to RFC3428, the MESSAGE verb is used for instant messaging as part of the SIP exchange.

Otherwise, the SIP exchange is straightforward, as follows:


The SIP exchange is shown in Wireshark packet list form below:

In the packet list we see that Apple is using user@address:port for the SIP address (URI). Looking at the detail of the INVITE frame we can gather additional detail. First we'll look at the message header content (content has been omitted to protect the privacy of the remote caller): 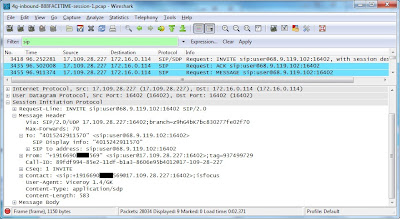 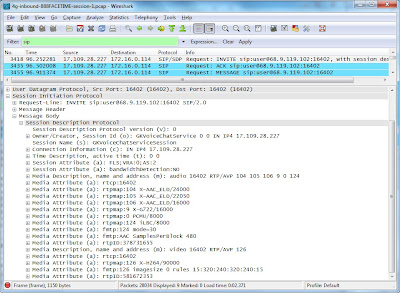 The message body details the Session Description Protocol (SDP) content, including the SDP session owner as "GKVoiceChatService" which is documented in Apple's iPhone SDK. We can also see the Real Time Control Protocol (RTCP) negotiated for UDP/16402, as well as multiple negotiated media attributes, essentially reduced to AAC for audio and X-H.264 for video.
Later in the SIP exchange, we see several of the MESSAGE verbs. Although intended for use in instant messaging applications, the MESSAGE verb is used by Facetime to exchange arbitrary data between the two iPhone devices. The MESSAGE verb payload data repeats the "User-Agent: Viceroy 1.4/GK" information, then includes the message "Content-Type: application/ske", similar to a HTTP exchange. Following this tag we have a Content-Length tag and "SKESeq: 1;0" for the first of the 4 MESSAGE verbs. Each subsequent MESSAGE verb also includes this content, changing the numeric identifier "1" for the successive packets (e.g. "SKESeq: 2;0", "SKESeq: 3;0" and "SKESeq: 4;0").
We can apply the display filter "sip.Request-Line contains "MESSAGE"" to focus the Wireshark display on these MESSAGE frames, as shown below. 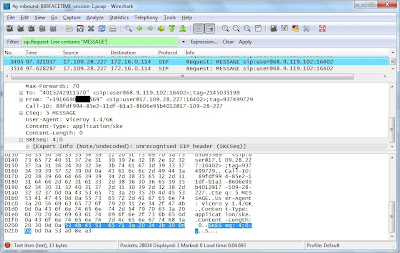 A quick Google search doesn't turn up anything about the SKE protocol, though I'll speculate here that it is some kind of authentication negotiation mechanism. A summary of the 4 payloads following the SKESeq header is as follows:
This data requires further analysis, possibly representing a proprietary authentication protocol used by Facetime through SIP MESSAGE verbs.  I'll devote further analysis to a later article so we can move on to the good stuff.

Following the SIP exchange we see a RTP exchange over UDP/16402 with a reflexive source port.  To evaluate this stream we'll turn to the videosnarf tool by Arjun Sambamoorthy and Jason Ostrom.  Videosnarf and the parent tool ucsniff are really impressive, and Jason and Arjun are really cool guys as well.

Videosnarf can read from a libpcap file, but the current version of the tool does not properly accommodate wireless packet capture link types other than native 802.11 (e.g. it cannot interpret PPI or Radiotap headers), with the following error:


My packet capture uses the PPI header, so I added support to handle this link type with videosnarf.  Download and apply the patch as shown (against videosnarf 0.63, future versions will hopefully integrate this functionality and not require patching):

Once videosnarf includes the ability to read from wireless packet captures with the PPI header, we can run it against the packet capture again:

Videosnarf was able to extract four H.264 data streams, saving them to files.  We can quickly evaluate the contents of the files to determine if the content itself is encrypted using the "ent" tool:


Ent applies several tests to evaluate the entropy and randomness of a given file.  In this example, entropy is fairly low at 4.5 bits per byte.  Compare this to a data stream collected from the Linux /dev/urandom device:


Clearly the output from the Facetime video stream as extracted by videosnarf is not encrypted. Sadly, it does not appear that the extracted data is viable to play with mplayer:


It appears the reconstructed file is close to a H264 file, but has some errors preventing it from being played back.  This is still positive from an attack perspective though, since we know the content is not encrypted; hopefully the videosnarf developers will release an updated version soon that can address any problems with reconstructing and saving the H.264 stream.

Let's summarize what we learned today:


Next time we'll spend some time looking at the initial TCP exchange between the iPhone 4g and the authorization process that initiates the connection.  Comments and questions are welcome, thanks!